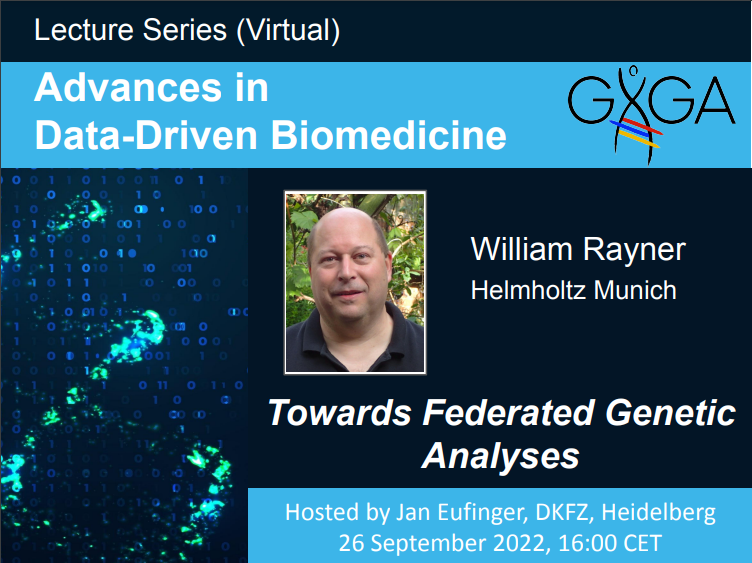 Doctor William Rayner from the Institute of Translational Genomics at the Helmholtz Center Munich presented "Towards Federated Genetic Analyses" at the GHGA lecture series ("Advances in Data-Driven Biomedicine") on September 26, 2022.

With the ever increasing size of human genetic data, and the increased regulation on privacy, new solutions are required to continue analysing data and delivering health benefits for all while respecting the privacy of the individuals participating.

One solution is the trusted research environment where bringing the researcher to the data, rather than the other way round, allows the data to be analysed in a way that ensures privacy for the participants and avoids the issues of downloading and storing large quantities of data. This though can pose problems when attempting to combine data sets across multiple jurisdictions, as has been common with the many GWAS consortia that have yielded multiple novel associated loci.

The Common Infrastructure for National Cohorts in Europe, Canada, and Africa (CINECA) is a H2020 project that is working on developing a framework based on the Global Alliance for Genomics and Health (GA4GH) standards for federated analyses across continents. This lecture will cover the experiences of Dr. Rayner on the CINECA federated genetic analysis to date, highlighting the issues that have been encountered, and overcomed, along the way.

Dr William Rayner is head of the Data Informatics group at the Institute of Translational Genomics at Helmholtz Munich and has a particular interest in all aspects of data privacy, federated data systems and synthetic data. This interest was sparked by an industrial placement at Baylor college of Medicine as part of a degree in Biochemistry at the University of Bath.

Following a PhD in computational protein structure design at Leeds University in the UK he moved to Oxfordshire, where he worked for a couple of small biotech companies.Then following a short spell of work on renovating his home he took up a data management position at Oxford University working in the field Type 2 Diabetes (T2D). Initially on the international type 2 diabetes 1q project this role expanded to include managing over 70 data sets on all aspects of diabetes, diabetic complications, as well as many of the related traits.

He has contributed to many of the large GWAS projects and consortia, WTCCC, GIANT, MAGIC, DIAGRAM, DIAMANTE, GLGC, along with work on many other collaborative projects such as the federated nodes of the common metabolic diseases portal. He has also developed a number of freely available data sets and tools, such as the strand alignment data for Illumina and Affymetrix Genotyping arrays and the tools to utilise these and validate data sets both pre- and post-imputation.